Every company has a crisis plan for dealing with emergencies, and so did Swiss retail giant Coop back in February when the coronavirus pandemic first hit Europe.

“That plan wasn’t quite adequate since we were not in a normal crisis mode,” says Tim Sutor, team lead of In-Store Merchandise Processes and Store Replenishment at Coop. “We’d never seen anything of this magnitude. We had to adapt very fast to keep our shelves stocked and all supermarkets nationwide open.”

Coop’s CEO quickly created several crisis teams, and Sutor was asked to take responsibility for the replenishment processes on one of those teams. His team was given carte blanche to make any decisions needed to keep supermarket shelves stocked. Being able to make decisions without going up the chain gave Coop the ability to react with the speed and accuracy needed to meet the challenge head-on.

At the end of February, as the pandemic surged in Italy, supermarkets close to the border saw sales surge by 70 percent as Italian shoppers swept in to stock up on essentials. Pretty soon Swiss demand also shot up, and the need to accurately forecast demand and distribution became business-critical.

Forecasting and replenishment is a tricky business to begin with. Normally, the company allows a window of two to three hours to finalize the daily orders before the logistics process begins. But when the pandemic hit, distribution centers that were already operating close to capacity were faced with much higher demand.

“It was like having two Christmas peaks at the same time without having time to prepare,” says Sutor. “Usually we bring in a third more employees during seasonal peaks, but we have weeks to get them on board.”

To solve the problem, employees were transferred from Coop’s non-food business areas, which were closed by law during the crisis.

“The real challenge was to deliver huge loads without enough platforms and space in the distribution centers,” says Sutor. “And while our suppliers had stocks in our warehouses in other countries, truckers could not cross borders during lockdown.”

Daily sales of canned goods in particular were three times normal levels. Coop is known for its broad assortment of products, but even normally slow sellers were sold out. How would the team ensure the delivery of the 1,000 absolutely critical items that every supermarket must stock to satisfy customer needs?

At this point the crisis team’s decision-making capabilities began to play a vital role. The first decision was to shift thousands of products away from the normal, daily delivery cycle so that the most relevant products were given highest priority in logistics at the cost of niche products. This was a critical step in managing the huge demand and ensuring merchandise availability in all stores.

Normally, final decisions are made by regional planners who know their territories inside and out. The second decision was a very unpopular one: forecast would be finalized at headquarters level to better control distribution. The crisis team needed complete control over data to analyze and understand the unusual sales patterns that occurred as the pandemic developed.

“We could no longer afford to tweak forecasts based on gut feelings,” Sutor, a former data scientist, says. “We were relying on the system for quick results. The data was making the decisions on how and where to distribute goods. This enabled us to have all critical items available in all stores, even if it was not the first brand of choice.”

Reliance on the system paid off. Customers got what they needed, and market share increased significantly during the crisis. According to Sutor, “That may not sound like a big deal, but it is a big market, and it proves we were making the right decisions.”

The company runs a number of other SAP solutions and is a co-innovation partner for retail replenishment and forecasting, in particular, for the new forecasting engine — the unified demand forecast component of SAP Customer Activity Repository. Coop started using the unified demand forecast component for replenishing some categories before the pandemic. But because forecast quality is better and the system reacts faster to short-term deviations, the company decided to roll out the tool for the entire fresh product assortment, covering several thousands of products, five months ahead of schedule.

Coop is not, however, allowing the current crisis to detract from its other efforts to become a tech-driven, intelligent enterprise. One long-term goal is to create a more flexible and sustainable shopping experience and realize the vision of zero waste for fresh food.

Three years ago, the company introduced a new project for promotional planning. Coop runs a promotion-driven model for its more than 60,000 products, so it is important to determine the optimal amount of promotional food quantities in all one thousand stores throughout Switzerland.

The unified demand forecast component of SAP Customer Activity Repository uses historical sales data (per store, per product) to determine the exact promotion quantities. Goods are distributed based on a self-learning, artificial intelligence (AI) algorithm that improves forecasting with each new sale.

“This tool creates a win-win for everyone,” Sutor shares. “We can significantly reduce waste by reducing overstocks and increasing targeted planning. Customers get fresher products, and, thanks to increased automation, employees can devote more time to customers instead of resolving exceptions and issues.” 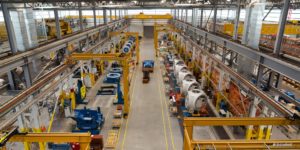 No industry is exactly the same. Consumer products, manufacturing, energy and natural resources, financial services, and public services – these industries and many more face regulations, customer demand, and digital …